In each of above arrangements, there is some relationship between any two consecutive numbers.
A sequence is a collection of numbers arranged in a definite order according to some definite rule.
The numbers are denoted by a1, a2, a3, ……, an. a1 is the first term, a2 is the second term, …, an is the nth term.
The sequence of numbers is denoted by f1, f2, f3

Some sequences are given below. For every sequence write the next two terms:

In the given sequences, observe how the next term is obtained. 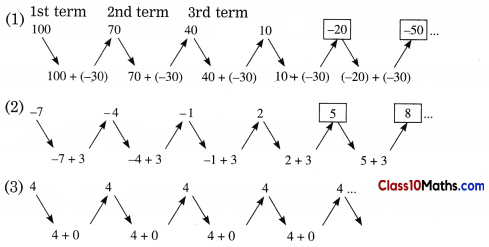 In each sequence above, every term is obtained by adding a particular number to the previous term. The difference between two consecutive terms is constant.

The difference in ex. (j) is negative, in ex. (u) it is positive and in ex. (iii) it is zero. If the difference between two consecutive terms is constant, then it is called the common difference and is generally denoted by letter d.

In the given sequence, if the difference between two consecutive terms (tn + 1 – tn) is constant, then the sequence is called Arithmetic Progression (A.P.). In this sequence tn + 1 – tn = d is the common difference.

[Note : The answers to the questions (ii) to (iv) can be given only after learning the formula for the nth term of an A.P.]

Kabir’s mother keeps a record of his height on each birthday. When he was one year old, his height was 70 cm, at 2 years he was 80 cm tall and 3 years he was 90 cm tall. His aunt Meera was studying in the 10th class. She said, “it seems like Kabir’s height grows in Arithmetic Progression”. Assuming this, she calculated how tail Kabir will be at the age of 15 years when he is in the 10th ! She was shocked to find it. You to assume that Kabir’s height grows in A.P. and find out his height at the age of 15 years.

We apply the theory and formulae of an A.R in solving various word problems which we come across in day-to-day life.