An experiment in which all the possible results are known in advance, but none of them can be predicted with certainty, is called a random experiment.

The following are some examples of random experiment:

The result of a random experiment is called an outcome.

3. There are four suits in a pack of playing cards. Spades, hearts, diamonds and clubs. Each suit has 13 cards. Spade and Club are black cards. Heart and Diamond are red cards. King, Queen and Jack are called face cards. The card bearing number 1 is called Ace card. Ace card is not a face card. So we have fifty-two possible outcomes.

A given number of outcomes are said to be equally likely, if none of them is expected to occur in preference to the others.

eg. when we toss a coin, the head or tail is the equally likely outcome. 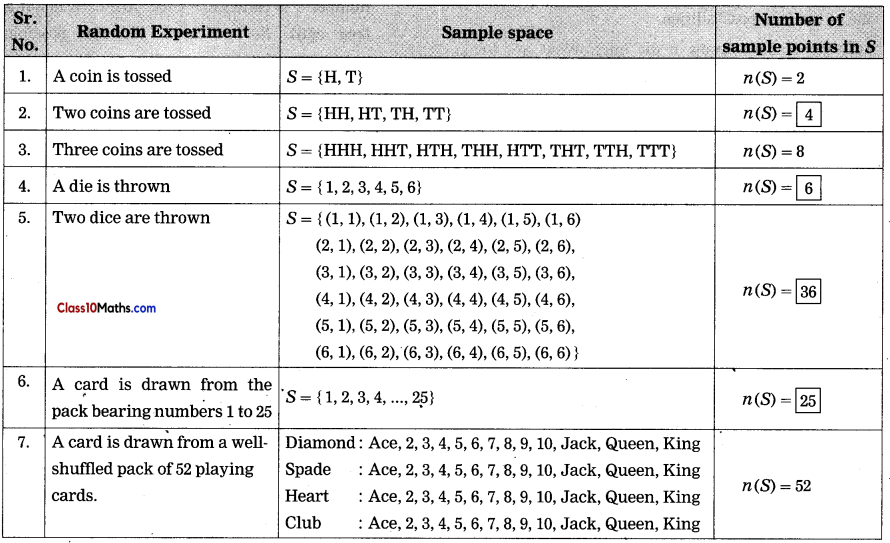 A set of favourable outcomes, of a given sample space is an event.

Event is a subset of the sample space.

Events are generally denoted by capital letters A,B,C,D, etc. For example, if two coins are tossed and A is the event of getting at least one tail, then the favourable outcomes are as follows A = {TT, TH, HT}

Probability of an Event:

The probability of an event A in a finite sample space S, is written as P(A) and is defined as

If E is any event,